Halloween means different things to different people, but often just the word conjures up images of glowing pumpkins and glowering scarecrows, spooky ghosts and sinister monsters, hellish haunted castles and heavenly candy. Halloween on San Juan Island? We’ve got all of those covered, but today as I’m drinking my own pumpkin spice latte with Stumptown’s Hair Bender beans, I want to focus on one story. 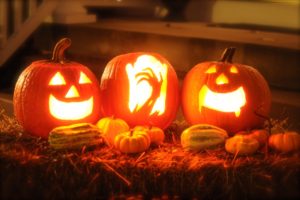 The Afterglow Vista Mausoleum is one of those places visitors need to see when they come to San Juan Island. A short trail through mossy forest opens in a clearing where rests the remains of the McMillin family. Designed and built by San Juan Island resident John S. McMillin – the man who founded the Roche Harbor Lime and Cement Company, which later became the location of Roche Harbor Resort – the Afterglow Vista Mausoleum was completed in 1936. The remains of John and five of his family members rest in six granite chairs surrounding a table in the center of the impressive structure. Five giant roman columns, one only incomplete sticking down from the top like a scraggle-tooth, enclose the space, guarding it from the outside, physical world while at the same time giving no doubt as to the imposing nature of the man responsible for its creation. A romantic, too, McMillin designed the structure so that June sunsets would shine through the columns and bathe golden light onto the chairs holding the ashes of him and his wife. 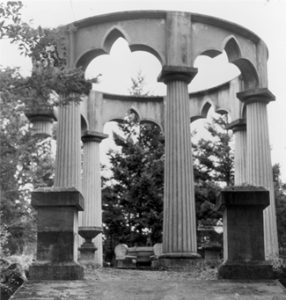 Powerful, mysterious, and beautiful, the mausoleum’s ethereal views hint at the ghostly experiences many visitors have. Some have reported seeing blue orbs hovering over the chairs while others hear voices whispering around them. Some people have tried sitting on the table and promptly felt hands grabbing them and trying to push them off. Cold spots linger within the space. Is the McMillin family guarding their own final resting space?

I don’t know the answer to this mystery, but as I sit here at Riptide with my own hot coffee, the only ghosts I see are the occasional children in sheets running by towards the harbor. I’m okay with that. 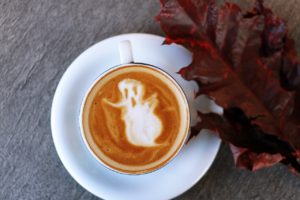